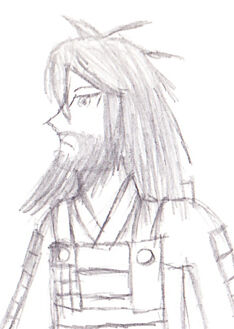 Tenno Jimmu was the first Tenno of the New Empire of Japan. The Tenno's bloodline, or the House of Genji claims it's right to rule the Sub-sector through him as the ancestor of all Tenno.

Early Life and Crusade for Unification

According to the beliefs of the Imperial shrines of the Nippon Sub-sector, Jimmu is believed to have been a descendant of Holy blood. As Jimmu was from Miyazaki, a Feudal World there is not much record on his ancestry. It is known that he was born on 13th February of an unknown year as the youngest out of the four brothers that were the sons of the warlord that ruled a planet.

As Jimmu came to age, he had a dream of an angel sent from Holy Terra whol told him of his destiny to unite the Sub-sector under the banner of the Emperor of Mankind. He gathered his brothers and told them his vision of uniting the Sub-sector. They departed their planet with their armies and gatherered followers from other planets and systems to join their cause and sparked a mass migration. Jimmu's older brother Istuse led the migration and moved East towards Nara. When they reached Osaka, they encountered Shogun Yoshiemon and Istuse was killed in their first battle. Jimmu realised that they lost because they fought Eastward, against the direction of Earth. He chose to leave the planet once, established a stronghold in Mie, fought the Shogun at Nara, a planet facing West towards Terra at the time and emerged as the victor. With the victory Jimmu has crowned himself the Tenno, the ruler of the Sub-sector chosen by the Heavens.

Yoshiemon, after being defeated fled to Hokkaido. He sold his soul to the dark powers of Chaos to again the power to bring himself back into power. The Shogun then declared war against the Tenno and divided the Sub-sector. The Tenno had another dream and this time, the angel gave him guidance on defeating his foe once and for all. With the guidance of the dream, Jimmu led the crusade against Yoshiemon in Hokkaido and won once again. The Horus Heresy allowed him to completely unite the Sub-sector and establish it's border.

At some point in his life, the Tenno visited Holy Terra with Suizei and a retinue to see the Emperor of Mankind with his own eyes. Unfortunately, he wasn't able to see him due to the latter's state after his fateful duel with Horus. He however did not despair as he saw further importance in the role of the Tenno. He and his descendants are to rule the Sub-sector for the saviour of Humanity. Content with his pilgrimage he returned to Nara.

"My mission set by the Heavens to unite the Sub-sector is complete. I can die without despair in my mind to weigh me. I have faith my sons and sons yet to come to guide the Sub-sector under the Light of Holy Terra after my soul leaves for the Warp. The Emperor protects those of the Faithful, living or dead." - Jimmu's writing found after he passed away

Tenno Jimmu died at the age of 126 from old age, a fate only deserved by the virtuous. He died with his mission of unity complete. He is venerated at the Unebi-yama Shrine in Nara and only his successors can enter the shrine. His name standed for "Divine Might". His son, Suizei became the second Tenno shortly after his death.

Tenno Jimmu left behind a large mark on the Sub-sector. He has managed to unite all under his banner with his crusade. His descendants took the role of the Tenno from him, carrying on to rule the Sub-sector. The seal he designed became the symbol of the Sub-sector and his philosophy of the unification of Humanity under Terra's roof. His saga is preserved by the local Priesthood and recited on the Foundation Day.

Jimmu was bestowed the honour of a Saint by the Ecclesiarchy and as a result became the patron saint of the Sub-sector, revered by all of the faithful.

His direct surviving descendants include Sugihito, the current Tenno and Jingu Genji.

The founding Tenno, originally hailing from a Feudal World and to fight Yoshiemon has incorporated weaponry and armour with varying technologies. Of note are the following:

The Carapace Armour was one of the gifts from the Adeptus Mechanicus as a sign of their alliance. The armour was designed with Miyagi's homeworld in mind, resembling the armour of samurais. Blessing have been made on the armour to maximise possible protection.

The armour is currently stored in the Tenno's residence.

The Kusanagi no Tsurugi is a sword that Jimmu was bestowed by the Angel upon during one of his dreams. The sword is said to be able to cut through thick armour with ease thanks to being blessed by Holy wards. The Tenno used the sword in battles in his lifetime.

The sword survives to this day and is only seen by public eye during Tenno's Accession ceremonies privately held by Imperial priests. Close examination of the sword is unavailable and not allowed for being considered the Regalia of the Tenno. The current location of the sword is unclear but is tightly protected by priests.

The longbow is the only weapon Jimmu was unwilling to trade for superior projectives. He mastered archery to the point that he can search for an exposed region of armours to do proper damage.

Currently the longbow is stored in the Tenno's residence, never used for nearly ten thousand years.

Community content is available under CC-BY-SA unless otherwise noted.
Advertisement