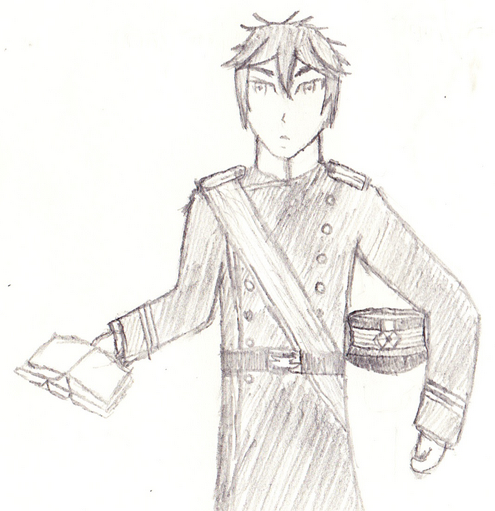 Born 16th February, 40,894 NE, Sugihito (杉仁天皇) is the current Tenno, or Sub-sector governor of the New Empire of Japan. He took leadership in 40,913 NE. Like his siblings, he has a Drookian name: Donau Macallan V though he uses his Japanese name for symbolism as Tenno.

Sugihito is introverted but he has a stable and thoughtful mind. He may seem calm in the outside but he is filled with worries, paranoia and anxieties (becoming a Tenno doesn't help). As he is a young leader, he has an idealistic side to restore his Sub-sector to it's former glory. He also has poor social skills and is prone to causing some kind of trouble. All of these can be traced to how he was held in low expectations during his childhood. He wears his uniform during his time in the Imperial Guard and only wears the medals and honours he actually earned in service as a sign of modesty, an inversion to many Sub-sector governors. His youth can also make him vulnerable to manipulation but Darth Kaiser has made sure he doesn't get manipulated. His paranoia what helped him survive his time in the Imperial Guard.

Early Life Sugihito was born to the Tenno's bloodline. His father was one of the previous Tenno of the Nippon Sub-sector at the time and his mother was a retired Imperial Navy officer.

When Sugihito's grandfather, the Governor-General of the Nippon Sub-sector died, his father became the successor. His father wanted to have Alexander has his future successor but only the first-born son could be made an heir.

Sugihito attended Saint Celestine's school in planet Tokyo, taking education under the Imperial Creed. The school was attended by children of nobles and was considered one of the best schools in the Sector. He was known to have stayed out of trouble most of the time, hinting his survival skills that later allowed him to survive the horrors he will face.

Sugihito became a member of the local Imperial Guard regiment: the 357th Yokohaman Centurions, beginning his career. His superiors noticed his penchant for staying from trouble and surviving many things thrown at him with the skin of his teeth and was selected for officer training and spent an extra year to train. He participated in conflicts across the galaxy and earned the title of by the end of his service Lietenant Major. The 357th Yokohaman is currently the only regiment in the Imperial Japanese Army to remain using the name Centurions and the Tenno's bodyguards are drawn exclusively from the regiment.

One of the campaigns he was part of involved co-operation with an elite mixed Regiment known as the Ragged Edges and was responsible for the communication between them and his Regiment. During this, he met and developed a seemingly one-sided crush on a Tallarn guardswoman. After the objective of the campaign was completed, he was planning to confess his feelings but before he could, the 357th Yokohaman was recalled back to the Sub-sector.

When the Forces of Chaos invaded the Nippon Sub-sector, Sugihito's family became the leader of the defence. Tragically, they were defeated by the Chaos Space Marines warband lead by the warlord Erebus the Wolf. The governing family retreated to Yokohama and a civil war began.

The resistance was able to retake the planet but the victory came at a cost. Sugihito's father and other high ranking officers were killed in the final attack along with Erebus. The population of the sub-sector significantly dwindled with an estimate of 13 billion survivors and the military was severely weakened.

With the planet liberated a new Tenno was needed to take the previous' place. Sugihito agreed to take the mantle of leadership and was crowned Tenno.

Some some after becoming the Tenno, he was nearly assassinated by a Chaos cultist. When he was dining at a restaurant, a cultist attempt to attack him with a knife. The attacked was thwarted by a small stranger who threw and pierced the cultist's throat with a chopstick. Sugihito asked for the stranger's identity and he revealed himself to be Darth Kaiser, a former Pokemon Sith Lord who chose to leave the Sith order. The encounter began a friendship between the two with Darth Kaiser eventually becoming a close advisor.

The Re-establishment of communications with the rest of Humanity came. The series of events began during the summit in Choson, where Darth Kaiser attended to represent the Sub-sector. He encountered former-Commissar Raege during the summit. Through this summit, contact was indirectly re-connected.

The tour continued to the Imperial Japanese Navy Headquarters in Kanagawa for the second day. He was joined by his sister, Jingu during the tour but his role was cut short when he received a message from Admiral Ozawa.

With the news of a rescue operation in the Grand Alliance War a success, Sugihito rushed to the person of importance. He was able to see her after she was settled in a hospital to treat her injuries sustained.

The person in question was Ikram Malak, a guardswoman he developed a crush on. He visited her everyday but he was too afraid to show his face to her and to confess his true feelings to her. When Malak was deemed fit to return to active duty, Sugihito finally met her in person to confess. The confession did not go well as the Tallarn Guardswoman was devoted to her duty in the Imperial Guard, but agreed to spend some time with him until she is sent back to the frontlines. On the day she left, she gave him a shemagh from Tallarn as a token of appreciation along with a letter she has got a medic to write due to her illiteracy and the Tenno has kept it since.

Fortunately for him, Darth Kaiser has pulled some political strings in his favour. He has convinced Holy Terra to attach her in Tokyo to oversee it's return to the Imperium of Man, making her return still as a Guardswoman fulfilling her duty. Since then, Sugihito visited her regularly but her ever-emotionless face makes it impossible to understand if she appreciates the visit or if she does have feelings for him at all.

The Tenno was invited to Equestria shortly after Lord High Admiral Grey's visit, which he accepted. At Equestria, diplomatic relations with the Azerothian Union and Equestria have been opened. He has also received diplomatic gifts from the Azerothian Union including a pet Worg, Type 97 Chi-Ha Medium Tank and an Azerothian blade and have given the Order of the Six Foundations to the Chairman and an officer's dirk in return. He met his current love Melanion, a Blood Elf serving in the Maroon Army in this diplomatic visit.

The Tenno was involved in another civil, but quiet war. It was discovered that Chaos Cultists have infiltrated the government to destroy it from the inside by attempting assassination on prominent leaders. When Jingu was nearly killed, it became a sign that the government has been infiltrated. Loyalists and cultists fought within silently for the war with the loyalists gaining victory again. The Shadow War had forged the Tenno into a more capable leader while shaping his views on the Galaxy.

The Tenno owns several businesses in the Sub-sector as a method to earn money for the government along with taxes.

The Imperial Hotel is the best-known business the Tenno owns. The luxury hotel housed many influential people from within and outside of the Empire. The Tenno's Family is also the largest share-holder of Kusagani Arsenal, a corporation that is dedicated in making the finest quality of products available in the Galaxy.

Sugihito has been known to have had a rocky relation with his father while he was still alive. His father has always preferred for Alexander to take the mantle of leadership. With his death and Alexander's disappearance, Sugihito nevertheless took the role as his father's successor.

Sugihito has a brother named Alexander Macallan. Alexander is his younger brother who also served in the Imperial Guard. However, there are reports that he has defected and joined the Tau Empire. Sugihito has ordered him to be killed on sight as a possible traitor as standard protocol. Though their relations are undocumented, it is implied that they have a strained relationship.

Sugihito's mother, Kiyoe was a senior member of the Sub-sector's Battlefleet. They are both in good terms.

Relations with his sister Jingu is generally positive. He has not seen her for years as she was shipped to other planets as well and not being able to respond in time during the Sub-sector's peril.

His collection of Pre-Imperial militaria is well-known. He is said to own a full set of N7 armour which he keeps it like a museum piece. He buys and collects rare weaponry and his favourite is said to be the M-99 Saber that was built specifically for him from an unknown source.

He also has a strong interest in Mobile Suits. It was his order to incorporate them into the military, forming a Mobile Suit Regiment for each planet. He personally owns a customised IJA-9900 Gundam X painted in Army colours with gold trims.

Emperor Sugihito has yet to marry, leaving succession an issue. If he does not marry and have a child, the throne will most likely go to the next of kin. If his successor is too young, Darth Kaiser will step in as his regent or even his sister will become an interim Tenno. Major figures have in the past tried to force him to marry their daughters but all attempts have failed with Darth Kaiser's intervention and the Tenno being able to escape the worst situations alive.

Community content is available under CC-BY-SA unless otherwise noted.
Advertisement