The Queen Class Ultra Aircraft Carrier is a class of Aircraft Carriers named after President Micheal Queen (DRN, 2034-2058). The Class was officially named for the President Posthumously by (then VP) William Carter.

Using the CVN-78 Class Hull and bridge, it still has a distinct look of the Hastings Class although bigger and weighing considerably more.

One of the main features of the Queen Class Ultra Aircraft Carrier is the 6 Electromagnetic Aircraft Launch System(EMALS) and it's magnetically tensioned Arrestor Wires, plus the ability to carry more aircraft over the current Hastings Class Super Aircraft Carrier, it is speculated that a single Queen Class Ultra Aircraft Carrier could carry 150 Aircraft(?)(Give or take, will work on this number a little bit later, for now it's a placeholder) It can also make more effective use of the C-27JN Oceanhawk Family of Aircraft for Super Carrier Onboard Delivery, Electronic Warfare and Aerial Refueling.

Using the CVN-78 Hull, the engineers at General Dynamics Naval Systems Rockport Facility lengthened and widened it. They then took the Bridge of from the Hastings Class and used it, giving it a distinct look of a Hastings Class but bigger. The Queen Class is unique over other Aircraft Carriers that the Democratic Republic has produced in the fact that the bridge and elevators sit on a raised platform in the center of the carrier, this allows for the placement of the 6 catapults. 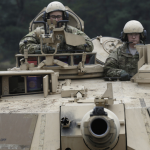