Lord Kalix was a member of the Killik race serving the Imperial Order of the Sith in the year 1000 NE. The Killiks of 1000 NE were not the same as those who had attacked the Empire a millennium before. The survivors of the Killik War had been altered genetically by nano technology and, over a thousand years, evolved into a new species. The Killiks remained loyal to the Empire that liberated and spared them through the ages and remain so as it enters its Millennial era.

He is publicly rivals with Darth Yaegar and the two can often be seen arguing, violently at times. The most common subject of argument is Raxus Walker, whom Kalix considers to be unfit to carry the mantle of Sith Lord. This attitude can be found throughout the Sith Council, with many members seeing Raxus's Sith title as a mere formality. Some, such as Darth Malus, have been known to openly mock the Emperor. 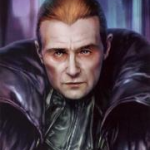